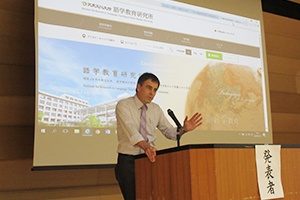 Nearly four decades have passed since the Institute for Language and Education Research (Gogaku Kyōiku Kenkyūjo, Goken) was established in 1983 as an accredited body of Daitō Bunka University’s Foreign Language Department. The research conducted by the members of the institute primarily focuses on foreign language education and linguistics but also includes cultural studies. Every two years, six to eight members of the Faculty of Foreign Languages are accepted as researchers of this institute representing the following five languages: Chinese, English, French, German, and Japanese.

Furthermore, every member of the institute presents his or her latest research once a year in one of the research meetings (kenkyū happyōkai). Finally, the representatives of each of the five languages mentioned above organize annual guest lectures (kōenkai). On average, the institute coordinates four research meetings with two presentations each and five lectures that are open to all members of the university and guests.

The various subpages of our homepage offer a more in-depth view of the activities of our institute. Inquiries should be sent to “daitogoken[at]mail.com”.